Another of my diary comics, which I will eventually collect in a book as I make more. A few that I decide to share, I will post online. Others will be book exclusive. 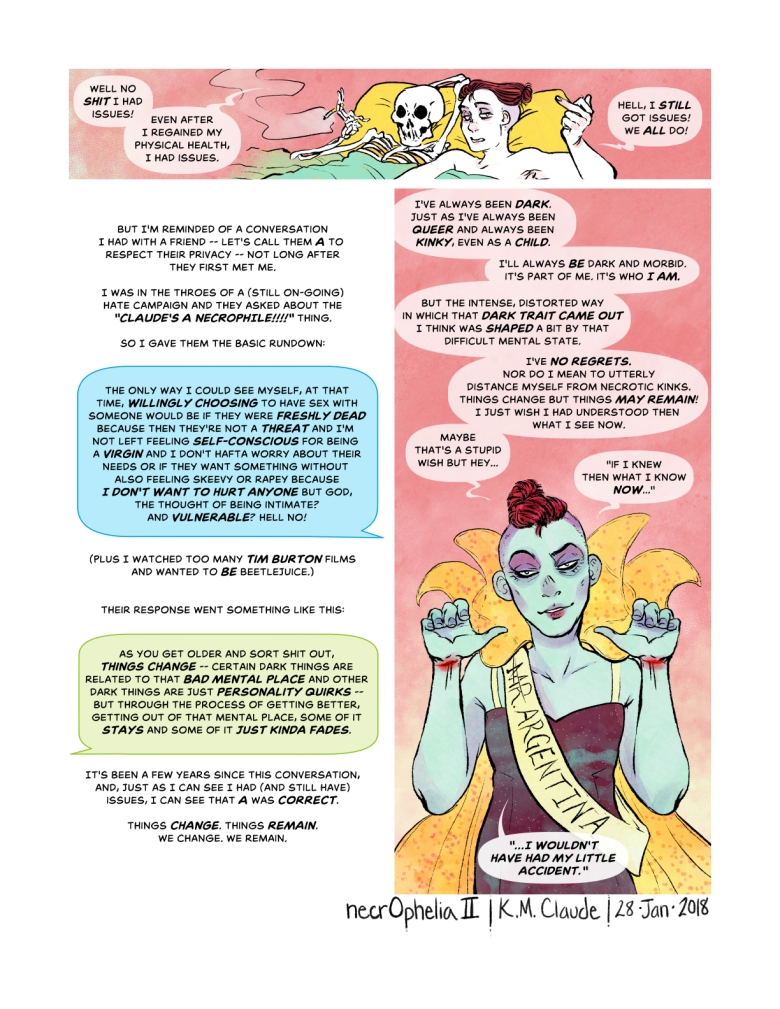 What can I say? I really really wanted to be (and bone) Beetlejuice…

Jokes mostly aside, I admit this comic was a difficult one. I don’t actually like being vulnerable — I’d much rather be a bit shocking, a bit self-depreciating. Perhaps I took that “be the gross ghost with the most” mindset a little too seriously. But after spending holiday with my partner, I realized that the person I was — the person who was ill and hurting for years — had a fundamental misunderstanding of some things in a way that, even after recovering, I didn’t realize until I actually had some lived experience. More than lived experience but good, untraumatizing (for once!) lived experience. But then again, I also more fully came into who I was — who I am — as a queer person between then and now as well! Things change…

And things remain. I love the gothic. I find Poppy Z. Brite’s Exquisite Corpse to be insanely erotic. Victoria Elizabeth Black’s cannibal necrophiliac floorshow on the finale of Dragula is transcendent. My favorite musical is about a love affair with Death for Chrissakes! Morbidity, darkness, and a sexual danse macabre are all aesthetic and artistic interests of mine — always have been, always will be. And that’s where another difficulty came in on this comic: I never want to throw kinky or alternative people under the bus or to even come off like that, like I’m sitting high and mighty on a throne going “so long suckers, I’m NORMAL now unlike you deviant freaks!” or something because that’s not the case. That’s far from the case. I just hope that that is indeed conveyed because this world’s hard enough to get through without the added weight of feeling like a freak.

These comics will be based on experiences and thoughts I’ve had regarding life, and its many struggles, including those of gender, sex, mental illness, and everything in between. I am hard on myself both as a protective measure (life can’t hurt you if you beat it to the punch) and as a result of my mental issues. As a result, the language is and often will be blunt, aggressive, shocking, and sometimes painful; similarly, my humor is often dry, self-deprecating, and dark. I write the way I speak and definitely the way I speak to myself which is not often nice.

While some things may be embellished, simplified, or exaggerated for the comic medium, there is always a truth to them for that snapshot of time.

This site uses Akismet to reduce spam. Learn how your comment data is processed.